Carsten Fire Closing In On Containment 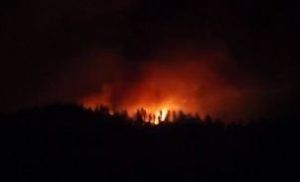 Mariposa County, CA — Fire fighters continue to put out the flames in the Carstens Fire near Mariposa. The fire is now 75 percent contained with almost 2.5 miles of vegetation scorched. All the nearly 1,500 residents have returned to their homes.


Cal Fire reports they have been able let some crews head back to their neighboring districts. Still battling the blaze are nearly 1,000 fire fighters, 62 engines, 27 fire crews, 4 dozers, 12 water tenders and 5 helicopters. Many of those fire fighters are with the U.S Forest Service.

Also, two great horned owlets that were rescued by a crew in the Buckingham Mountain area Wednesday are getting healthier. Sierra National Forest Officials says they will be released back into the forest as soon as possible.

A special thank you to Fire Fighter Nick Gauthier for sending in the owlet photos.