The Columbia Air Unit Is Up 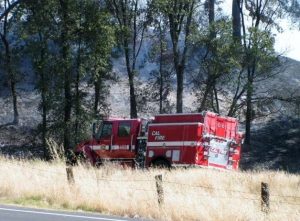 Copperopolis, CA — The aircraft is headed to a vegetation fire near Copperopolis. Fire Fighters on the ground report several acres are on fire at Telegraph Road and Highway 4. Cal Fire reports the winds are fanning the flames. There is no word on whether any structures are in danger at this time.

Update 1:05pm: Cal Fire says several acres are burning, but the forward spread of the flames has been stopped. Initially, they reported winds were helping to fan those flames.

Update 1:30pm: Cal Fire reports the 10 acre grass fire has been contained. They say no structures were threatened.