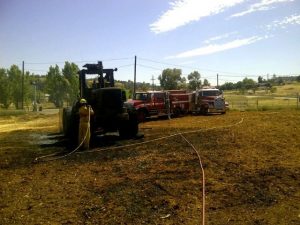 Update 3:35pm: Cal Fire reports when crews arrived on the scene a bucket loader was in flames. They were able to put the fire out in minutes. Cal Fire says no one was injured and no structures were in danger.

A special thank you to Lt. Robert Anzar of the Tuolumne County Fire Deptartment for sending in photos to news@clarkebroadcasting.com.