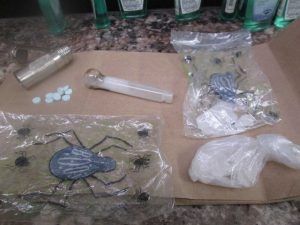 Jamestown, CA – A nervous woman behind the wheel piqued the curiosity of a deputy who called in for back up from a four-legged partner that ended up sniffing out a sizable drug bust.

It was the woman’s erratic driving in a BMW and going about 10 mph on Highway 108 near Chicken Ranch Road that first caught the Tuolumne County Sheriff’s Deputy’s attention this morning while patrolling in Jamestown just after 1 a.m. While following the sedan the deputy ran a records check that signaled the registration was expired and a traffic stop was made.

Noticing that the driver, 57-year-old Jenee Cronk of Burson, was very nervous during questioning and her answers did not make sense, the deputy began a sobriety test while waiting for back up to arrive, according to sheriff’s spokesperson, Sgt. Andrea Benson. That is when K9 Maverick went to work sniffing around the car and signaled his handler of possible drugs inside the vehicle. A subsequent search uncovered there was 19 grams of methamphetamine packaged in separate bags, several diazepam pills without a prescription, drug paraphernalia, and evidence of drug sales.

Cronk was arrested on several felony drug charges including transportation and sales.