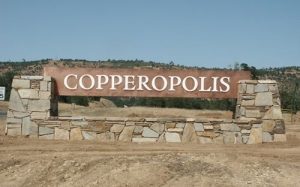 Copperopolis will be celebrating its 153rd birthday this Saturday.

Rollings said that in 1860, there was no Lake Tulloch in the area (it’s a man made reservoir) and it rapidly grew into a very populated community, thanks to the excitement of the gold rush.

The 153rd birthday celebration, officially called the ‘Copperopolis Homecoming Celebration’ will take place in ‘Old Town Copper’ along Byrnes Ferry Road, beginning with a pancake breakfast served from 8am – 10:30am at the Armory.

A hometown parade will take place at 11am. The Rollings Family have been chosen as grand marshals.

The Rollings have lived in the community for nineteen years and Sandy has been helping to organize the Homecoming Celebration since 1994.

Rollings said it is not too late to be a part of the parade, so just give her a call. Spectators will also find numerous vendors, politicians and plenty of food and drink.