New Leader, Board To Take The PG&E Helm 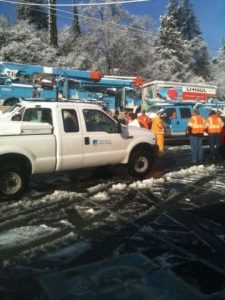 Bill Johnson, who recently served as the head of the nation’s largest publicly-owned utility, the Tennessee Valley Authority, was tapped as the new PG&E leader. The utility, which is privately held, is in the midst of Chapter 11 bankruptcy proceedings and facing billions in liabilities in the wake of 2017 and 2018 wildfires.

The company additionally named ten new board members who will be joining three holdovers, who will all stand for election at PG&E’s annual shareholder meeting next month. The new board includes several people with energy, utility and bankruptcy expertise as well as others with jobs in investment management.

An official board statement noted that it had heard the calls for change and took action that would ensure that PG&E has the right leadership to bring about “real and dynamic change” that reinforces its commitment to “safety, continuous improvement and operational excellence.”

Democratic Governor Gavin Newsom last week criticized an earlier board member list, describing it as containing too many people with Wall Street ties and not enough California and utility experience. Although some changes were made, his office indicated the governor still has some concerns and that the utility will be held to the highest standards.