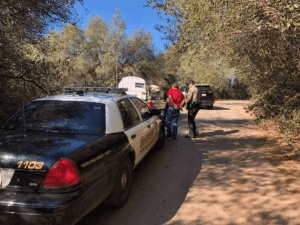 Sonora, CA — During the course of a warrant service on one suspect, Tuolumne County deputies arrested three men on multiple charges, including some fresh felonies.

Sheriff’s spokesperson Sgt. Andrea Benson shares that deputies arrived at the Golden Dove Lane residence of 54-year-old Kenneth Hansen over the weekend. They wound up additionally picking up 57-year-old Dino Galindo of Stockton and 50-year-old Daniel Brennan who happened to be there as both had outstanding arrest warrants. A subsequent search of the area turned up several loaded firearms and ammunition.

The three men were arrested and booked into the Tuolumne County Jail. Hansen, a convicted felon and prohibited from possessing guns and ammo, was booked on related fresh felonies as well as on his warrant of battery, theft, and violation of probation. Brennan was booked for outstanding drug charges and an out-of-state warrant; Galindo, for a warrant including vehicle code violations and driving with a suspended license.