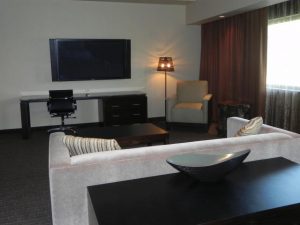 Tuolumne, CA — A snip of the scissors and Black Oak Casino Resort is now officially open for business. Me-Wuk Tribal Elders had the honor of cutting the ribbon at the hotel’s grand opening Wednesday afternoon. A large crowd was on hand to celebrate the opening.


Tuolumne Band of Me-Wuk Tribal Chairman Kevin Day says everybody wins, “That’s part of the tribe’s vision, not only to help ourselves get to where we need to be successful, but also the local community and we think this is going to do that.”

The new hotel employs around a hundred people including support staff. Almost all of the building was constructed by locals.

Black Oak Casino Resort General Manager Ron Patel says that’s not the only boost to Tuolumne County’s economy, “We’re targeting guest from the east bay, the valley and the bay area, so we’re going to be spreading a lot of marketing dollars advertising Tuolumne County and what the county’s got to offer, not just the hotel.”

The hotel actually started to rent some rooms in early April. The hotel is 116 thousand square foot facility with 148 rooms, a conference center, and several other amenities. Future plans still call for a golf course and housing development.