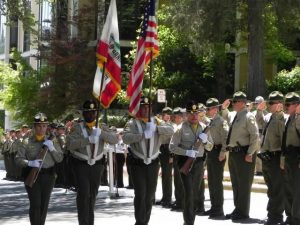 Sonora, Ca — Law enforcement officers from across Tuolumne County gathered at Courthouse Park in Sonora during the noon hour today to remember those who have fallen in the line of duty.

The state of California lost two peace officers in 2012, and the names were read off during the memorial ceremony. Deputy Robert Lee Paris Jr. of the Stanislaus County Sheriff’s Department was one of the officers. On April 12, 2012 he was serving eviction papers in Modesto when he was shot. The suspect killed himself after his residence caught fire. The other officer honored was Officer Kenyon M Youngstrom of the CHP in the Contra Costa area. He was shot making a traffic stop of a Jeep the shooter was killed by an assisting officer and also died September 2012.

Officials say today’s ceremony is a way for officers to grieve the loss and remember the families.

The memorial included a bagpipe player, horns belting out taps, a gun salute and singing of the National Anthem.

Local officers were on hand from the CHP, Sonora PD, Sheriff’s Office and other agencies.