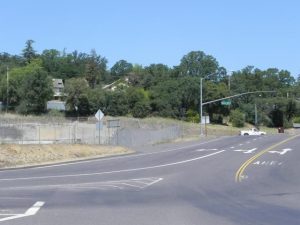 McDonald’s is moving ahead with putting another restaurant in Sonora at the intersection of Mono Way and Sanguinetti Road. Currently, there are McDonald’s restaurants in the Junction Shopping Center and off Standard Road and Mono Way. Plans are the for the Junction location to eventually close.

Sonora’s Planning Commission has already approved the building plans for the new location and now it’s giving the go ahead to build a retaining wall, with one stipulation. Community Development Director Rachelle Kellogg says, “It’s going to be 15 feet at its highest point and the commission approved that, but they did require that the wall be made of a cultured stone or something that looks like stacked slate. It would resemble the wall that we have over at the blood bank which will look a lot nicer than just a block wall.”

Also at this weeks meeting, the Commission approved allowing a sign exception for the Old Town Sonora building. Instead of just one sign for those stores facing Stewart Street, there will be wall space for all stores in the building.