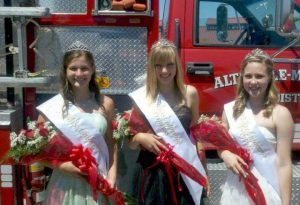 The Junior Miss Calaveras Queen is Bailey Van Zant of Altaville. She is a student at Mark Twain Elementary School. Also in her court are First Princess, Summer Hamari, and 2nd Princess, Grace Garcia. Both are from Copperopolis, Summer is home schooled and Garcia also attends Mark Twain Elementary. The queen and her court will appear in the upcoming Frog jump parade on May 16th and the Queen will be presented at the Calaveras county fair over the weekend.

The Junior Frog Jump was won by Kaylee Kautz of Vallecito with a frog named Lucky who jumped 13 feet 8 inches. As the first place winner she will be in the final round of jumping at the Calaveras County Fair International Frog Jump Championship on Sunday May 19th.