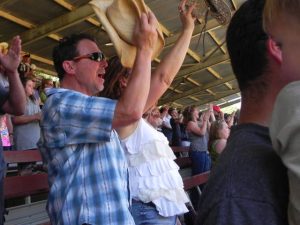 Sonora, CA — The 56th Annual Mother Lode Round-up ends today, but you still have time to catch some of the action and fun. Thousands blanketed Washington Street in downtown Sonora for the Parade. There were plenty of floats, horses and bands marching down the street. Click here for an early story with pictures of the parade.


The parade lasted for just over two hours and then the crowded headed to the Mother Lode Fairgrounds to watch all the roping, riding and wrestling. Cowboys and Cowgirls competed in calf roping, bucking broncos, barrel races, and the main event bull riding. Also a big attraction were the Percheron Thunder a team of six horses with their trainer riding them roman style, standing on two of the horse’s backs.

The Mother Lode Round-up Rodeo wraps up today and if you missed any of the action you still have time to join in the fun as the bulls take on the cowboys at 2.p.m.