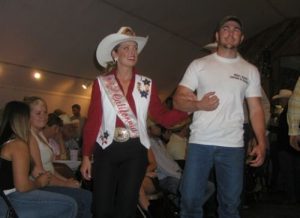 Jamestown, CA — Mayhem is one description of the Calcutta with the bidding for teams taking place tonight. Calcutta is just one event, along with a host of others, that bring an economic boost to Tuolumne County. This weekend is the Mother Lode Round-up and things are heating up. One event that draws a big crowd is the Calcutta.

Tuolumne County Sheriff’s Posse member Dan Durnall explains, “It’s mayhem during the Round-up. If you haven’t seen it, you have two people latched on to 400-500 pound calf and they have to tie a ribbon around its tail. The fastest time wins.”

The Calcutta is one of the primary fund raisers for the Round-up’s high school scholarship fund. Tuolumne County Sheriff’s Posse member Al O’Brien says all the events greatly impact the local economy. O’Brien says, “The rodeo puts about 20 thousand people downtown in Sonora for the parade every year. All the events leading up to it attract a lot of attention. We pack the area for the rodeo. Families come in from all over the west to have their family reunions base around the Round-up and Mother’s Day Weekend, so the economic impact has been felt traditionally in the millions of dollars to Tuolumne County.”

O’Brien says it cost the Posse around $175,000 each year to put on the Round-up. He says it couldn’t be done without the sponsors.

The Calcutta starts tonight at 6p.m. at the Sheriff’s Posse’s Fairgrounds near Jamestown and it’s free! Click here for all your Mother Lode Round-up information.