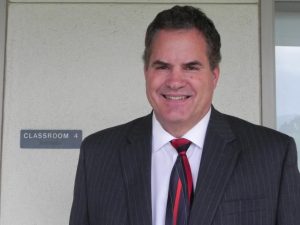 Sonora, CA — Summerville High School District has hired a new Superintendent. He is 58 year old Robert Griffith from Fresno. He has 26 years of experience in education. Most recently he was the principal and school supervisor over Central High School in Fresno, California. It has 4,100 students and 240 certificated and classified staff including 182 teachers.

At tonight’s Summerville High School Districts Board meeting Griffith told the crowd, “The biggest passion for me is that I love students. Why are you coming here? Let me clear that up, the reason I’m here is one reason only. I have a lifetime passion and commitment to create outstanding situations for students to thrive and to build teams of adults that know how to help students thrive and grow.”

Griffith says he knows there challenges ahead including implementing the Common Core State Standards and the bond measure money. As for the 8 million in bond money, Griffith says, “My responsibility is to make sure that the plans are carried out and they are well planned. Also, the projects come in on time and under budget or at budget and result in an outstanding product. My role at this point is really in carrying it out, so that is what I will be focusing on.”

Griffith takes over for retiring Superintendent John Keiter who has been with the District for 10 years. Keiter retires on June 30th. Griffith first day on the job is July 1st. His salary is $140,000.00.

Below is the District’s Biography on Griffith background:

Robert Griffith has been hired by the board of trustees as the new superintendent of Summerville Union High School District following a rigorous search and interview process. Mr. Griffith comes to the district with 26 years of service in education, most recently as a principal and school supervisor over Central High School in Fresno, California, in which he directed all aspects of the education of 4,100 students while supervising 240 certificated and classified staff
Griffith began his career after receiving his Bachelor’s degree in Industrial Technology from Fresno State and Master’s degree in Counseling Education from California Lutheran University, Thousand Oaks, California. Mr. Griffith spent 16 years as a classroom teacher in his credential areas of Industrial Technology, Social Science, and Special Education. He has been a long term coach of football, girl’s basketball, and track. Coach Griffith had a highly recognized coaching stint in winning 18 league championships in 12 years with three section championship teams, multiple coach of the year honors, and was a regular sports clinic speaker.

After eleven years at the school, Mr. Griffith transitioned in 2003 to the position of assistant principal at Sierra High School, in Sierra Nevada foothill area of Tollhouse, California. From 2006 to 2013, Griffith was the principal of Central High School. Under Mr. Griffith’s leadership the school has made dramatic changes in instructional and learning expectations at the school. The results have been sharp increases in A.P.I. scores, Advanced Placement participation and passing rate, closing the achievement gap in students with disabilities, increased exit exam passing rates, and increasing graduation rates. Under Mr. Griffith’s leadership the school has installed Super 700, a STAR testing student recognition program; FACE OFF, an on campus all day peer integration conference; Project 720, a mentoring program teaming community members with at risk students; a co-teaching model for student equity; and P.B.I.S., a positive behavior intervention system. With Mr. Griffith’s direction, the school recently received a successful W.A.S.C. accreditation review; in the last two years the school has been recognized with three California School Board Association Golden Bell Awards for “Athletes as Readers and Readers”, “Poetry SLAM”, and “Technology Education.”

Mr. Griffith is married to his wife Lois. They have four married children and six grandchildren living in California, Missouri, and Senegal, Africa. Mr. Griffith enjoys going to student school activities, reading, and follows a lifelong daily exercise routine. Mr. Griffith has enjoyed several trips to Mexico to build houses for the homeless and has traveled to Africa on multiple occasions as a guest teacher. Most recently in March, Mr. Griffith and his wife traveled to Dakar and spent twelve days visiting family and participated in an Operation Christmas Child distribution.

On his appointment as the superintendent of Summerville Union High School District, Mr. Griffith says: “I would like to thank the board of trustees, the community panel, and current superintendent Dr. John Keiter, for the outstanding welcome I received through a meticulous selection process. The pride of the Summerville School community is evident in the positive interactions I have had with students, staff, and community members. It is an honor and privilege to become a part of the Summerville community and serve our students. They deserve nothing but our best effort and we will strive to meet their educational needs, every student every day!”