Round Up Outlaws Stop Traffic 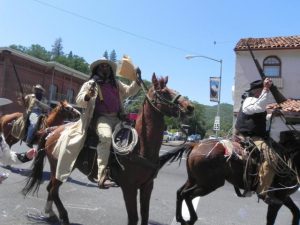 Sonora, CA — Traffic in downtown Sonora was interrupted this afternoon by a traditional Mother Lode Round-Up event, Coyote Sam and his band of “Outlaws” on horseback.

Each year “outlaws” try to stop to the Mother Lode Round-Up in a chaotic event featuring five outlaws in a mock gun fight with the Sheriff’s Posse. Onlookers witness the bandits on horseback harass Round-Up Queen Contestants and the Sheriff’s Posse fight back.

The event spills out into the street as five outlaws on horseback call for Sheriff Jim Mele to come out of a restaurant. Sheriff Mele, the Sheriff’s Posse, and many others are at the annual Round-Up sponsors luncheon. The Sheriff goes along with the fun eventually giving up an item to save the queen contestants. The thieves on horseback trot off saying that they have stopped the Round Up for good.

This will be the 56th year of the Mother Lode Round Up and it will be held on May 11 and 12th.

The next big event is the Great Steak BBQ this Sunday, April 27. Horsemanship Competition on May 4th at 10am at the Mother Lode Fairgrounds. The Queen Pageant is Sunday, May 5th at 5pm at the Sonora Elks Lodge. The Band Review is Wednesday, May 8th at 6pm at Sonora High School. The Calcutta is Thursday, May 9th at 6pm at the Sheriff’s Posse Grounds. The Parade is Saturday May 11th at 10am, and the rodeo starts later in the day at 2pm at the Fairgrounds. For more information about the Round Up view the Round Up Event Section here.