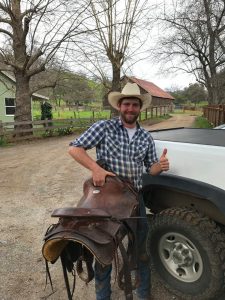 Sonora, CA — Tuolumne County Sheriff’s officials helped a local family reclaim a saddle that was stolen back in 2003.

The sheriff’s office reports that Sgt. Jeff Hunt received a call from the Engler family who had spotted their grandfather’s saddle for sale online via an auction house in Idaho. The saddle had been stolen from the family’s barn in 2003.

The sheriff’s office reports that the company offering the saddle for sale was unaware that it was stolen, and was very helpful in returning it to the family, now 16 years later. The grandfather had since passed away, so the family was very thankful to find the long lost treasure. It is very unique and was branded and engraved with the family’s insignia.