No Known Threats To State 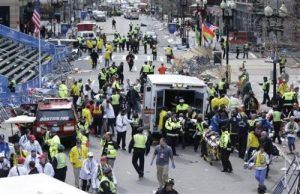 California’s Acting Governor has released a statement about yesterday’s bombing at the Boston Marathon.

Acting Governor Gavin Newsom says he and his wife are “deeply saddened” about the horrific events. He goes on to say, “There’s no indication of any threats to California or our local communities at this time. However, these events are a reminder to remain vigilant and always report anything unusual to your local law enforcement agency.”

Newsom assumed the Acting Governor duties when Jerry Brown left for a trip to China. Authorities are still looking for a person of interest in Boston. The Associated Press reports at least three people were killed yesterday morning, including an 8-year-old boy. Some of the 140 plus people who were taken to local hospitals lost limbs. Seventeen people were critically wounded.