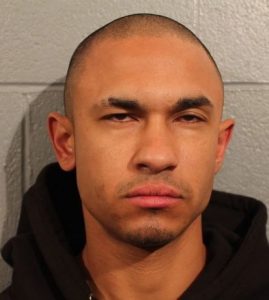 Angels Camp, CA — The Angels Camp Police Dog sniffs out drugs hidden in a stolen car, two suspects have been arrested. Recently, in the 100 block of S. Main Street (HWY 49), an Angels Camp Police officer stopped a Nissan pick-up with license plates registered to a Ford. The vehicle was reported stolen out of Modesto in December 2012.

According to police Joseph A. Alvitre, a 26 year-old Tuolumne resident, and John R. Blackwell III, a 26 year-old Stockton resident were in possession of tools commonly used to commit burglaries. Also found was a replica nickel finish semi-automatic pistol and an expandable police-style baton.

The Angels Camp Police Dog was called to check for the odors related to narcotics, and the dog alerted to the front passenger side of the seat. The seat had to be cut with a knife to remove over a half-ounce of methamphetamine and approximately 2 grams of black tar heroin. The drugs were concealed in baggies inside of a black plastic container inside the seat. Neither suspect claimed to know about the hidden drugs.

Blackwell was also arrested and booked on charges related to vehicle theft, possession, sales and transportation of narcotics, possession of burglary tools, and possession of a billy club.