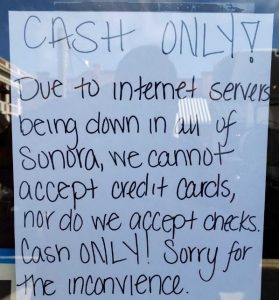 As reported earlier, the interruption in service, due to damaged cables in Wallace, was an AT&T issue, although customers of other service providers, like Verizon, had similar problems.  Further details on the outage are below.

Update 2:45 p.m.: Tuolumne County Sheriff’s Officials have released these updated non-emergency contact numbers for their dispatch office. These are NOT numbers for AT&T:

As reported below, AT&T has relayed to the Calaveras County Sheriff’s Office an estimated repair time of 9 p.m. Further details on the outage are also below.

Update at 1:45 p.m.: Calaveras County Sheriff’s Officials have relayed that AT&T has given them an estimated repair time of 9 p.m.

Update at 12pm: There is still not an estimated restoration time for the cell phone and landline outage being experienced in parts of Tuolumne and Calaveras counties today, according to AT&T. It is also impacting the internet service of several businesses in the area. AT&T reported earlier that a road construction crew damaged some of its cables early this morning.

It was reportedly in the Clements area.

In addition, the Sonora Police Department reports that AT&T has relayed that it will be an “extended repair time,” but no specifics are known.

Below you can find alternative phone numbers to reach various law enforcement agencies during the outage. In addition, the CHP Sonora office reports that its phone lines are down. In an emergency, call 911. If you need to reach the office for a non-emergency related matter you can call 209-356-2900.

Update at 11:10am: Cell phone and landline service remains down for many customers throughout Tuolumne and Calaveras counties today. The outage started at around 1am.

AT&T spokesperson Ryan Oliver has relayed a statement to Clarke Broadcasting, “Service for some customers in the Sonora and surrounding areas may be affected after a road construction crew damaged our cables while working earlier today. Our team is onsite and working to repair the damage as quickly as possible.”

The Sonora Police Department earlier stated that the incident occurred in the Wallace area of Calaveras County. AT&T has not indicated when service will be restored, or exactly how many people are impacted.

We have also received reports of customers of other service providers having similar issues. It is also impacting some businesses that are experiencing a correlating internet outage (see photo).

Update at 10am: The phone outage we have been reporting on is also impacting Adventist Health Sonora, so some additional phone lines are available for residents needing to reach the hospital:

911 emergency calls are being received by the Sonora Police Department dispatch.

Update at 8:20am: The Sonora Police Department reports that damaged AT&T lines were located in the community of Clements, which led to the widespread outage this morning. The outage is impacting cell and landline customers in both Tuolumne and Calaveras counties.  It is unclear when there will be full restoration.

Original story posted at 7am: Sonora, CA — Many AT&T customers in the Mother Lode are reporting issues with cell and landline services this morning.

The Sonora Police Department reports that most residential landlines in the city and county are still able to make 911 emergency calls. The PD adds that AT&T is aware of the situation and is working to identify and isolate the problem. AT&T has not provided an estimated restoration time.