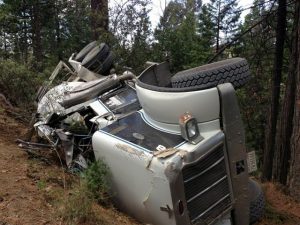 Twain Harte, CA — The CHP has opened South Fork Road after it was shut down for three hours after a concrete truck crash. The accident happened around 9a.m. The driver, 48 year old Benjamin Anderson of Sonora, was air-ambulanced to a Modesto hospital with minor injuries.  Emergency crews had to use the Jaws of Life to free Anderson from the wreckage. The CHP says Anderson was going too fast around a curve and lost control of the concrete truck. It went down and embankment and flipped over. It took crews three hours to upright and tow the truck with 65,000 pounds of concrete inside.