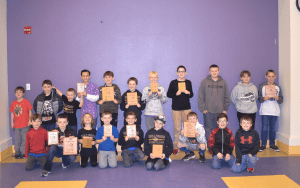 Angels Camp, CA — Among the Mother Lode student-athletes who made it to this season’s state championships is a talented team of youth wrestlers.

AMA (Angels-Murphys-Arnold) Youth Sports officials are sharing the results of a recent tournament to which members of their elementary school-aged wrestling team traveled.

The athletes wrestled two or more matches each against other state qualifiers traveling from as far as San Diego with Grycel clinching three match wins, which earned him a sixth place finish in the 10U 53lb class.

On March 3 at the annual SCWAY Nor Cal Kids Tournament of Champions hosted by Escalon High, Valente was the 8U 70lb champion, and first grader Cash Day, who attends Mark Twain El, placed second in the 8U 65lb class. Day, placed sixth at last year’s SCWAY Kids State Championship in the 6U 68lb class and hopes he will be wrestling again for a state win in the 2020 season.

AMA Youth Wrestling Director Nic Valente shares, “This year has been especially good for gaining new wrestlers and establishing their foundation while the returning wrestlers did a great job with advancing their abilities.”

After Bret Harte High wrestling practice ends high school-level coaches and Bret Harte alums hold sessions for the youngsters whose ages range from four to 13. Their four-month long season began in early November with over 30 youth wrestlers who competed in seven SCWAY Zone 2 tournaments. Some of the young athletes competed in up to a dozen tournaments.

Head Coach Nathan Vader, who has been coaching the up-and-coming Bullfrog wrestlers through the AMA program for the past six seasons, was Bret Harte’s head wrestling coach for five seasons, in which he coached both of his assistant coaches – Ben Garcia and Dan Lawson. Under Vader’s 2003-2008 tenure the Bullfrogs had two state qualifiers, three section medalists and won two league championship titles.

Practices begin for the new season next week. For more information on the AMA youth programs, click here.