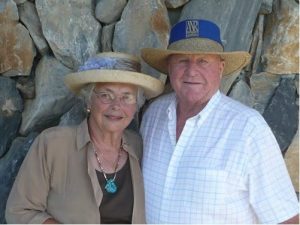 The California Bountiful Foundation has honored John and Gail Kautz of Lodi for their decades of service to agriculture education, farming and ranching. John is the Chairman of Ironstone Winery in Murphys and Kautz Farms. Gail has been a 4-H project leader in San Joaquin County for more than four decades and was the former president of the California 4-H Foundation. The two were honored at a dinner in March at the Hearst Ranch in San Simeon.

California Bountiful Foundation President Paul Wenger says, “Individually, John and Gail have made significant impacts to farming and ranching in California, but together, they are truly a force for progress in our state,” Wenger adds, “Their commitment to agriculture is apparent in all that they do, and the fact that their children have chosen to follow in their footsteps as third-generation farmers speaks highly of the values John and Gail share.”

More than 180 people attended the event. For more information on The California Bountiful Foundation click here.