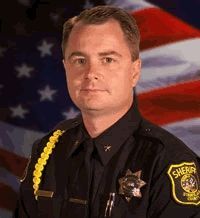 Mele says, “Pooley is a hard worker who will get the job done. We are really fortunate to have Bill come here. In the same sense, it’s very sad to see Undersheriff Keith Luney leave. I’ve had the privilege of working with him for 25 years. It’s kind of a bittersweet moment in my career because I’m losing a very good friend. A very capable and competent confidant, but I know that Bill will be able to step right in and not miss a beat.”

43 year old Pooley has been Chief of Riverbank for four and a half years. He started his career in 1990 in Tuolumne County and worked for Sonora Police Department. In 1994 he became a deputy for the Stanislaus County Sheriff’s Department. During his 19 years there he worked as a street crime detective, drug enforcement agent and supervised patrols.

Poole’s duties include patrol schedules, administrative support duties, fill in for the Sheriff when needed and helping oversee the jail. Also, he is no stranger to the area as his family were cattle ranchers in Tuolumne County.