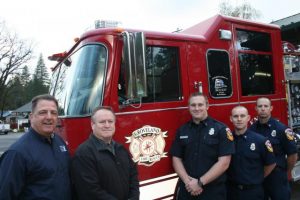 Groveland entered a new era this morning when it comes to fire protection.

As reported last week, Groveland Fire has joined forces with CAL Fire and Tuolumne County Fire as part of a new partnership agreement. The change took effect at 8am this morning.

The Groveland Community Services District started to look for ways to restructure the department after voters shot down a fire tax proposal in June of last year. The Groveland Fire Department serves approximately 15 square miles, including Pine Mountain Lake, Big Oak Flat and Groveland. The district responds to around 500 service calls annually.

An open house is being planned for April 16th at the Fire Station.