Mural To Go Before Planning Commission 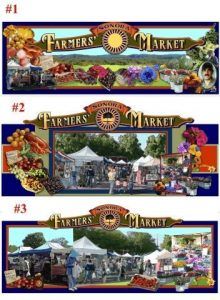 Sonora, CA — There is a community effort underway to place a mural on South Stewart Street in Sonora.

It would depict the popular Farmer’s Market, and also serve as a tribute to Eleazar “Ed” Rodriguez. The well-known figure, known as the “The Flower Guy”, was tragically killed in a vehicle accident last September after leaving the Sonora Farmer’s Market.

On April 8th the Sonora Planning Commission will hold a public hearing regarding whether to issue a design review permit for the 8×24 ft. mural. If approved, it would be placed on a building owned by Zachariah and Lisa Garman at 101 S. Stewart Street.

As you can see in the picture, there are three potential designs currently being considered, and the committee is seeking input regarding the most popular option. The designer is community member Judy Grossman. Committee member B.Z. Smith says the hope is that this will be the first of many murals that will go up in the community. She says it is a way to “bring public art to the outdoors.”

The committee is also raising money to cover the costs of constructing the mural, and a fund-raiser is being planned for May 14th. Click here to find more information on the project.