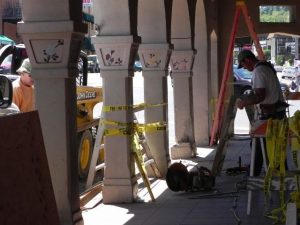 Sonora, CA — It’s been nearly a year, but City officials say the wooden-braces on the archway of the Sonora Inn on Washington Street where a car smashed into a pillar will soon be repaired. A van struck the pillar last May just before the Amgen Bicycle Tour was set to take off in Sonora.

Community Development Director Rachelle Kellogg says, “The city is ready to issue the building permit to fix that arch. We’re just waiting on an encroachment permit from Caltrans then we’ll be able to issue the permit and move forwards.”

The Caltrans permit will allow for a section of Washington Street to be closed while the repairs are being done. The owner has 180 days fix the damage.

Kellogg says, “I think they’ll get on it as soon as they get the permit issued. They know everybody wants to see it get done and they’d like to get it done as well.”

City officials say the repairs could take about 3 weeks.