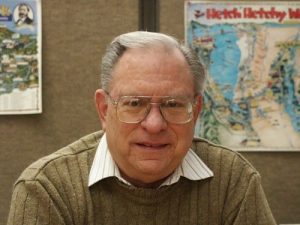 Tuolumne County Chamber of Commerce President George Segarini continues to monitor what he sees as a slow economic turnaround in Tuolumne County.


Segarini was Friday’s KVML “Newsmaker of the Day”.

“We are no longer in a situation where we are losing more chamber members than we gain,” said Segarini. “We are nearly equal in the amount of businesses gained and lost. We now have about 350 local business members.”

Segarini added, “The local housing market is finally beginning to improve. Sales tax revenue within the county remains mostly stagnant. At this point, the sentiment in general is that it is still a slow economy and businesses are not looking to expand. We are still scraping along the bottom so to speak”.

Earlier this month, The Chamber released the results of its annual State of the County survey.

The three categories of businesses; Retail, Service and Manufacturing were actually all more pessimistic than last year. Only 19 percent indicate they will soon hire new employees with 71% saying they will not.

Six percent of active Chamber members participated in the survey, down from 7 percent last year and 22 percent in 2010. Segarini says, “The survey has shown interesting changes over the years.” In a down economy he believes business are less enthusiastic to respond.

Segarini notes, Fifty-seven percent of those that responded to the survey felt the local economy is improving and would expand, down from 60 percent but still the majority. Sixty-one percent believe the national economy will continue to improve.

The employer opinion of potential employees has sunk lower than last year and even lower than it was in 2010. Responding to the question, “The current employee pool has the type of experienced person I’m looking to hire,” this year’s Yes was 57% down from 69% and No was up from 17% to 28%. Segarini noted, “You would think it would be the other way around,” implying that more people should be available but apparently not the ones with the right qualifications.

A new question was do you believe the county and city are currently doing their best in supporting economic development? 38% said yes, while 47% said no. Segarini says, “I was a little surprised, the city and county have committed funds to economic development and streamlined the process of development.”

Each surveys results apply to the previous year. Sagarini says he is in favor of doing the survey again, but it will be up to the Board to decide if the survey will be conducted next year.

Segarini finalized, “For any local business owner, there is a constant ebb and flow, especially during difficult economic times, and the Chamber offers class workshops, advice and support for its members.”