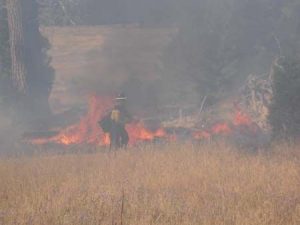 Yosemite, CA – Much of the smoke will be seen in the southern portion of Yosemite National Park. Fire Managers will be igniting the flames Thursday, April 4, or later. It will all depend on weather conditions.


Park Ranger Scott Gediman says, “The prescribe burn is to create defensible space in Wawona and includes about 150 acres. This will be the first prescribed burn of the 2013 fire season.”

Gediman says they are taking all the necessary precautions not wanting to repeat The Foresta Big Meadow Prescribed Burn in August of 2009. In that blaze, a prescribe 90-acre burn jumped fire lines and charred more than 11.3 square miles. It also forced dozens of evacuations.

Gediman says, “We’re going to have a weather monitoring device on site. We’re working with CAL Fire and the U.S. Forest Service on this one. Nothing in life is guaranteed, but we’re being very careful. Also, it is near the community of Wawona and there is some public and private housing there. So because of that, even if the conditions might look right, and even if we literally get to the morning of the burn and something isn’t right, we won’t do it.”

Gediman says the burn will take about two weeks to complete. He says people may see smoke throughout the park, but it will be more concentrated in the southern portion of the park along Highway 41 corridor and near the communities of Wawona, Fish Camp and Yosemite West.