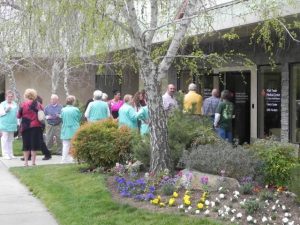 San Andreas, CA — Mark Twain Medical Center held its ribbon cutting for its new Cancer Center. Approximately 125 were in attendance at the new facility in Suite B at 700 Mountain Ranch Road in San Andreas. Plans to open the new center were approved by the board in September and the building opened for treatments in January.

MTMC President Craig Marks says, “This is a very special day. We began a journey several months ago to take Mark Twain from being a good hospital to being a great medical center.” He says, “We are doing that by identify services that we desperately need so that [patients] don’t have to go out of the county to get medical services.”

Treatments at the new center include medical oncology, hematology, PET Scanner, chemotherapy, and infusion therapy. The facilities were touted as comfortable and as home-like as possible with large heated and massaging chairs for patients receiving treatments.

Medical Oncologist, Dr. Robert D’Acquisto was hired on at the new facility. Dr. D’Acquisto said he was thrilled and thankful to Mark Twain’s Vice President of Ancillary Services, Larry Cornish. Dr. D’Acquisto noted a water fountain that was dedicated to Larry and Diane Cornish in memory of their daughter Catherine who recently passed away from cancer. He said, “Larry especially has been such an amazing person for us to work with. This center would not be here with out Larry’s hands on day to day work. So we honor Larry and Diane and we honor Catherine’s Memory.”

The ribbon was cut by Diane Cornish. Larry Cornish said, “This was an all out effort because we really needed to get this up for the community.” He noted that he was very pleased with the fountain and proud of the recognition for what Catherine brought to the community.

The fountain and a memorial for Catherine at the Little Angels preschool she ran are in the photos.