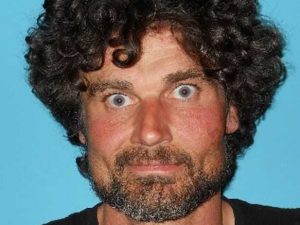 Jamestown, CA – A man that had just been released from jail allegedly terrorized two families vacationing on the Tuolumne County side of Lake Tulloch.

Originally, arrested for causing for a disturbance at the rental cabins in a campground on the lake recently, 37-year-old Nicholas Brown of Merced was charged with being under the influence of drugs and resisting arrest. One night later, a new round of calls from campers came in to Tuolumne Sheriff’s Dispatch reporting Brown was causing more trouble at the campground.

Witnesses told deputies Brown was screaming at two women and their children threatening to kill them while chasing them into a nearby business. The women, fearing for their children’s safety, locked them in the store’s bathroom while a clerk reported the incident to sheriff’s dispatch.  The store owner confronted Brown and ordered him to leave. That is when the suspect jumped into a Chevy Silverado and fled the scene.

Responding deputies spotted Brown driving on Tulloch Road and pulled him over. He was arrested once again, this time for terrorizing and making criminal threats. Brown’s bail was set at $25,000.