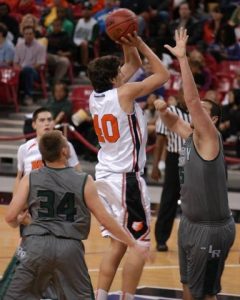 
Superintendent John Keiter was Wednesday’s KVML “Newsmaker of the Day”.


After a sluggish start, the Summerville Bears pulled away to defeat Liberty Ranch of Galt, 63-52.

“I was never nervous,” claimed Keiter. “After going through a tight bond measure recount earlier this school year, I knew that things would turn out just fine.”

The several hundred fans that made the long trip to the Sleep Train center were treated to a stunning comeback, which has been a hallmark of this years Bears squad.

At one point down 20 – 6, the Bears clawed back to tie the game at the end of the first half, 22-all. Behind some great adjustments by the coaching staff, extra hustle by the starters and terrific bench play, Summerville was able to keep the game close in the 3rd quarter.

Coach Ben Watson’s crew has been seeded number five in the Division IV bracket. Summerville will host Orland, at home, tonight at 7pm. Doors will open at 6pm. Tickets are available today at the office and at the door this evening.