Twain Harte Man Held Up In Home Asks To Be Shot 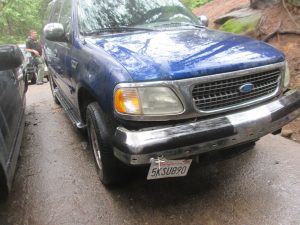 Twain Harte, CA – A Twain Harte man on felony probation asked deputies to shoot him to avoid going to prison.

When deputies approached the resident, Goldstein began yelling that he had a knife and refused to come out of the house, according to sheriff’s spokesperson Sgt. Andreas Benson. She added that he also said he would rather die than go to prison and asked them to shoot him. After about an hour spent talking to probation officers, Goldstein calmed down, Benson relays that he then came out of the home and gave himself up.

While running a records check on vehicles parked in the home’s driveway, a blue Ford Expedition came up stolen. The key to the SUV was discovered in Goldstein’s pocket after he was searched. Along with the warrants, he also faces possessing a stolen vehicle charges. His bail was set at $80,000.