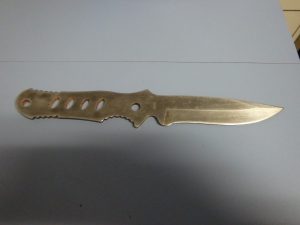 Sonora, CA — A man was arrested in Sonora Wednesday evening after reportedly getting into an argument at the Downtown Plaza Laundromat on West Stockton Street.

The police department was notified about a loud verbal dispute between three men at around 7pm. There was notable activity in the area, and officers responded and approached 37-year-old Kristopher Walters of Sonora, who was on searchable county probation. Officers searched his belongings and found a fixed blade knife in his backpack. He was arrested and booked into Tuolumne County Jail for carrying a concealed knife. It is not immediately clear what the argument with the other people was in regards to.