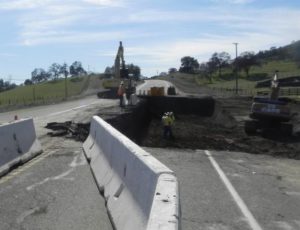 Jamestown, CA — The Highway 108 detour will be taken down and the road will reopen at 8:00pm tonight, March 4th.

Caltrans Spokesperson Chantel Miller says the final paving and temporary striping will be completed my 8:00pm ahead of the tentatively set Tuesday opening.

1,818 gallons of gasoline were spilled when a tanker overturned closing the highway for two weeks. The road was briefly opened after the accident and then closed again as soil tests determined that hazmat crews were needed to remove gasoline that seeped into the ground. A 200 foot section of the westbound lane of Highway 108, West of Jamestown, was removed as well as a large section beside the road.

The project, a joint command with Caltrans, was overseen by Mike Barrington. He said on Thursday, on February 28, they had removed 2,500 yards of material and were perhaps half way done removing the contaminated soil. Director of Environmental Health Rob Kostlivy said the Eastbound shoulder was tested and was not contaminated. The decision was made for crews to work around the clock until finished due to several factors including a nearby irrigation well, a lot of ground water in the area, and expected rain.

The closure, from the Yosemite to Montezuma Junctions, detours through Chinese Camp. It results in a roughly 10 minute delay.