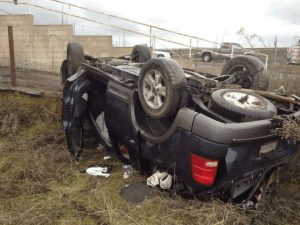 Sonora, CA — Three people were injured Sunday morning in an accident at the intersection of Mono Way and the Sanguinetti Loop.

Officers arrived at 11:36am and found a 2000 Ford Explorer on its roof in the vacant lot southwest of the intersection. The driver, 49-year-old Kenneth Camara of Tuolumne, was found to be under the influence of prescription medications. He was taken to Sonora Regional Medical Center, and later booked into Tuolumne County Jail.

A passenger, 22-year-old Deric Dehart of Jamestown, suffered injuries and was admitted to SRMC. A third passenger suffered minor injuries.