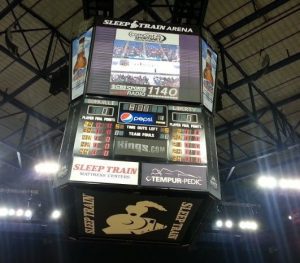 Sacramento, CA — After a sluggish start, the Summerville Bears pulled away to defeat Liberty Ranch of Galt, 63-52 for the Division 4 CIF Sac-Joaquin Championship.

The several hundred fans that made the long trip to the Sleep Train center were treated to a stunning comeback, which has been a hallmark of this years Bears squad. At one point down 20 – 6, the Bears clawed back to tie the game at the end of the first half, 22-all. Behind some great adjustments by the coaching staff, extra hustle by the starters and terrific bench play, Summerville was able to keep the game close in the 3rd quarter.

Still down by one point at the start of the 4th quarter, the Bear’s defense clamped down on the Sacramento Region’s #1 scorer, Michael Meserole. In the 4th quarter, the Bear’s shooting woes subsided. Using a 25-13 scoring run, they pulled away to win the game by 11 points. This is the first time the Bears have ever won the section Basketball Championship. Next is the NorCal Tournament where the Bears will face the best teams from all over Northern California.