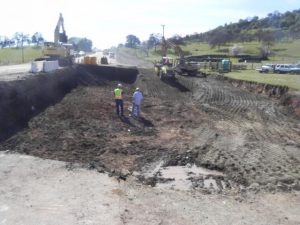 Jamestown, CA — The closure of Highway 108/120 and detour is the result of a 200 foot section of the westbound lane of Highway 108, West of Jamestown, being excavated to remove gasoline contamination from a tanker spill.

A tanker crashed on Highway 108 a week ago on February 20th closing the road. Crews have been working since then, using a photo ionization detector (PID) to trace the contamination from a spill of 1,818 gallons of fuel. The project, a joint command with Caltrans, is overseen by Mike Barrington who says they have removed 2,500 yards of material. Barrington says he believes they are at least half way done. He says they are working as hard and as fast as they can. A second excavator brought in today has helped to speed up the process to remove and back fill the area which is larger than a swimming pool.

The distinct smell of gas was still at the site today at 2:00pm. At the time of the accident the amount of fuel in the air was enough that any flame could have ignited the entire spill.

According to Director of Environmental Health Rob Kostlivy they hope to find the limits of the spill later today. The goal is to remove all the fuel to under 100 parts per million in the soil. Samples of soil have been sent to a lab, to confirm that the boundaries of the excavated area is clean, but they continue to find gasoline under the roadway down the hill from where the tanker crashed.

The Eastbound shoulder was tested and was not contaminated. A well on that side of the road, as well as a lot of ground water in the area mean crews will be working around the clock to get all contaminants removed before it rains next week.

Caltrans reports that the closure, from the Yosemite to Montezuma Junctions, will be 24/7 until Tuesday, March 5th or until the road can be repaved. A detour is set up through Chinese Camp. It results in a roughly 10 minute delay.