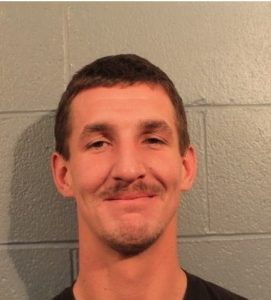 Farmington, CA  – The man who walked away from a Modesto Hospital after being shot in the stomach by his Uncle in Murphys last year is behind bars again. This time it took a helicopter with a heat-seeking device to catch 25 year old Jimmy Blake Terry of Murphys after he led deputies on a car and foot chase through two counties. It happened just after midnight on Tuesday. The CHP says deputies clocked Terry going 90 mph in a 2000 Audi down Jack Tone Road in eastern San Joaquin County. A chase began on Highway 4 heading east into Stanislaus County at speeds exceeding 100 mph. After nearly 15 miles, Terry drove into a pasture where the car became stuck. The CHP says he then took off on foot leaving his girlfriend, 24 year old Crystal Anne Towle of Stockton, behind.

About 25 minutes later, the helicopter detected Terry on its heat-seeking device and deputies found him in a drainage ditch. They say Terry had covered himself in mud in an attempt to hide in the drainage ditch which was nearly two miles from his abandoned car.
Terry, who is on parole, was arrested and booked into charged with felony evasion, resisting arrest and driving on a suspended license. Towle was also arrested and charged with providing false information to a peace officer.

Terry was most recently in the news after being arrested for causing a disturbance at a Murphys gas station. Click here for details on that story.

Click here for an earlier story on the shooting incident with his Uncle in Arnold in October of last year.