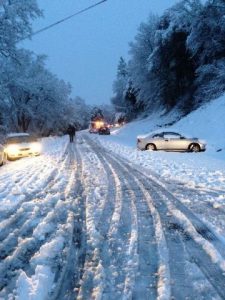 Sonora, CA — Four students are injured after a school bus accident near Coulterville yesterday and today Highway 49 was closed down for 2 1/2 hours to tow the bus away.

A Mariposa High School bus overturned around 4p.m. during yesterday’s snow storm causing minor injuries to 5 of the 16 students on-board. The CHP reports the bus driver, 63 year old Michael Brocchini, was driving at an unsafe speed for the 1-1/2″ snowy conditions. They say Brocchini lost control on a turn and went down a 30 foot embankment and the bus ended on its side resting in some trees. The students ranged in age from 14 to 18 and their injuries were described as minor. Five of the students were wearing seat belts.

Highway 49 near Coulterville was closed until 4:30pm today to retrieve the bus. For a map of the area go here.