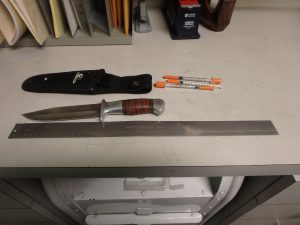 Sonora, CA — The Sonora Police Department reports that a man on parole for burglary was arrested last night near the intersection of Stewart and Church Street on a variety of charges.

During a search, an officer found a driver’s license that did not belong to him, a concealed fixed blade knife in his jacket and multiple hypodermic needles. 29-year-old Brandon Scott Nelson was arrested and booked into Tuolumne County Jail. A follow up investigation is being conducted related to the driver’s license. A parole hold was placed on Nelson which means he cannot bail out of jail.