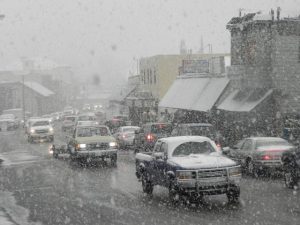 Cope says there are two buses letting kids out near the Gold Rush school (the Sullivan Creek) elementary school on Creekside drive. Students are walking home.

Mono way was closed at 5:00pm due to icy conditions between Restano and Sanguinette. The pile up at Rawhide road that began at 3:00pm is clearing up but Highway 49 at Mt. Brow, Greenly and many main roads have multiple hazards. CHP has 31 current incidents in Sonora.