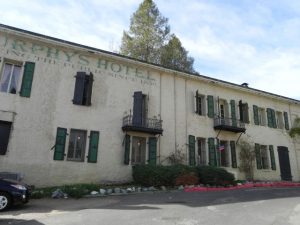 Murphys, CA – A bouncer was stabbed multiple times after he kicked a drunk man out of a bar. It happened this past weekend at the Murphys Hotel bar.


Calaveras County Sheriff’s Officials say 34 year old Jeron Daniel Roberts, previously from Angels Camp, became upset for unknown reasons. He left the bar slamming the front door. The bouncer followed Roberts into the street and a fight broke out between the two. Sheriff’s Officials say Roberts punched the bouncer several times. While wrestling on the ground, Roberts allegedly pulled out a 4-inch switchblade knife and started stabbing the bouncer in the leg. The bouncer and other witnesses were able to hold Roberts down until deputies arrived on the scene.

The bouncer suffered non-life threatening injuries and was treated at the scene. Roberts suffered minor injuries to his face.