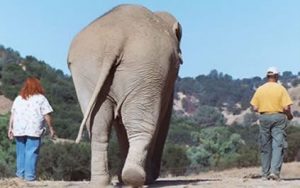 She died peacefully in San Andreas. Longtime partner, and PAWS co-founder, Ed Stewart was by her side. Derby had been battling throat cancer for several years.

PAWS has three sanctuaries, the largest being the ARK 2000 in San Andreas, which is home to elephants, bears, lions and tigers. Derby was a former Hollywood animal trainer and author.

PAWS has released a statement reading, “We’ll miss her fire, determination and fearlessness; her intelligence and her passion. We’ll miss her sense of humor. We’ll just miss her, period.”

A celebration of life service is being planned for a later date.