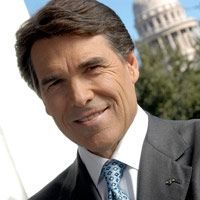 Texas Gov. Rick Perry brought his brash pitch for jobs to California this week as he sought to lure businesses to his state with the promise of lower taxes and fewer regulations.

Logue is the chairman of the Assembly Republican Working Group on Jobs and Economic Recovery and has been urging the Legislature to make job creation a priority again.

In 2011, Logue traveled with Lt. Gov. Gavin Newsome (D) and other lawmakers to Texas to learn firsthand about the policies that the “Lone Star State” had enacted to attract employers and jobs. Both men met with Perry.

In an interview with the San Jose Mercury News, he criticized California’s regulatory environment, and said Austin, Texas, is poised to become the “next Silicon Valley.”

“Twelve years ago, California wasn’t looking over its shoulder,” he said. “They’re not looking over their shoulder now — they’re looking at our backside.”

Perry’s office said the governor has met with leaders in the high tech, biotechnology, financial, insurance and film industries over the past few days. The trip, being paid for by a public-private marketing partnership called TexasOne, did not include any public events.

He added, “There are plenty of reasons Texas has been named the best state for doing business for eight years running.”

Brown last week dismissed Perry’s $24,000 in radio ads as a cheap gimmick. He said California has been adding more jobs than any other state. Non-farm payrolls increased by nearly 226,000 jobs in 2012.

He also wondered whether Perry might have a change of heart after arriving.

“A lot of these Texans, they come here, they don’t go back,” he told reporters. “Who would want to spend their summers in 110-degree heat inside some kind of a fossil-fueled air conditioner? Not a smart way to go.”

Perry arrived in California just months after voters approved higher income taxes on the wealthy and a quarter-cent increase in the statewide sales tax, adding to its perception as a high-tax state. California’s complex environmental laws have been blamed for long delays in new construction projects, whereas Texas has no such laws and also no income tax.

This isn’t Perry’s first such California trip, as Brown’s 2010 Republican challenger Meg Whitman noted during the campaign, saying the Texas governor enjoyed regular hunting trips to the state and that his prey was jobs. Perry, for his part, has joked that California is a “target-rich environment.”

Still, some business leaders said Perry may have a difficult time persuading companies to leave, particularly in the talent-rich Silicon Valley, known for technological innovation. Perry has declined to name any of the businesses he is targeting.

Kim Polese, chairwoman of financial services company ClearStreet Inc., and former chief executive of software company SpikeSource, said she is glad Perry is spotlighting the issue of California’s competitiveness and the need for changes to its regulations.

“But the startup world is thriving here in the valley,” she said, adding that startups are more concerned with issues such as crowd funding and a ready workforce than taxes and regulations.

Other governors also have engaged in high-profile ploys to try to lure companies and jobs away from states that are perceived as less friendly to business, though it’s unclear how successful those efforts have been.

Governors of several states sensed an opportunity in Illinois in 2011 after the state’s income tax went up. The group included New Jersey Republican Gov. Chris Christie, who flew in to meet with business leaders.

And Perry isn’t the only big shot to visit California this week. South Dakota Gov. Dennis Daugaard, a fellow Republican, is attending the World Ag Expo in Tulare to recruit dairy operators in an effort to double his state’s herd of about 92,000 dairy cows.

Daugaard’s office also recently ran radio commercials and print ads in Minnesota trying to lure businesses across the border. Not to be outdone, Wisconsin also has targeted Minnesota with signs posted along the state line that read, “Open for Business.”

Perry is winding-up his visit today in Los Angeles and Orange County.

Since his unsuccessful presidential run, Perry has kept mum on his political future. He faces re-election in 2014 and has said he’ll make a decision after the Texas Legislature adjourns this summer.

Perry hasn’t ruled out another shot at the White House or running to remain the nation’s longest-serving governor. But seeking a fourth full term in Texas might not be a cinch, although Democrats aren’t likely to mount a serious challenge for governor in 2014, Perry could face a stiff primary battle from the state’s popular and well-funded attorney general.