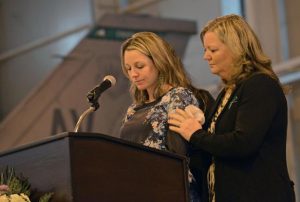 Service members, civilians, family and friends attended memorial service yesterday at Aviano Air Base in Italy for Major Lucas Gruenther. According to the public affairs office with the 31st fighter wing, a crowd of about 1,000 supporters from the Air Force and Italian communities in the area came to pay their respects.

Gruenther, a pilot assigned to the 31st Fighter Wing, went missing during a nighttime training mission over the Adriatic Sea on January 28. The investigation into his death is ongoing.

Brig. Gen. Scott Zobrist, 31st Fighter Wing commander said “He was a professional Air Force officer and a wonderful human being.” Zobrist continued, “As wing commander I must thank the hundreds and thousands of Italians and Americans involved in the intensive search and rescue that took place last week. It was one of the most impressive search and rescue efforts I’ve ever seen.”

A Twain Harte native, Gruenther, 32, is survived by his wife Cassy.

Among his many achievements, Gruenther completed more than 2,640 hours of flying time, including 400 combat hours. He taught himself Italian, which he used to help cultivate bonds between the Americans and Italians living in his community and on base.

During the ceremony, Gruenther’s wife Cassy was presented two medals on the major’s behalf. The Aerial Achievement Medal, for efforts during Gruenther’s deployment to Afghanistan, where he performed 17 Operation Enduring Freedom combat missions. The Meritorious Service Medal was presented for distinguished service as 31st Fighter Wing chief of flight safety and as 555th Fighter Squadron assistant chief of training.

A local memorial service is in the planning stages, to be held when the whole family can return from Italy. For details on the family’s wishes visit www.lucasgruenther.com