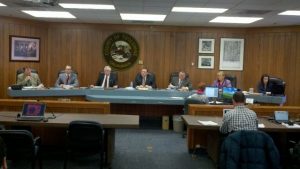 Sonora, CA — The Tuolumne County Supervisors voted to move forward with plans to disband many of the planning commissions and design review committees.

The vote was 3-2 to eventually eliminate the Jamestown, Columbia and Southern Tuolumne County Planning Commissions. The two votes in opposition were District Four Supervisor John Gray and District Five Supervisor Karl Rodefer. Gray was very vocal in his opposition, calling it a “disservice to the south county.” Gray argued that projects in the Groveland and Big Oak Flat area should be heard by a localized board because they are somewhat disconnected geographically. Rodefer spoke positively about the idea of streamlining, but could not support the final result.

Those in favor argued that this will increase the speed of the review process for projects because there will be just one overall Tuolumne County Planning Commission. By a separate vote of 5-0, the Supervisors voted to disband the design review or advisory committees for Phoenix Lake, Tuolumne, Twain Harte and Muller Subdivision.

County staff will now draft ordinances and resolutions, with an effective date of July 1st, 2013. The Board will continue the conversation this afternoon regarding other aspects of the planning and design review process.

Also this morning the Supervisors observed a moment of silence for Major Lucas Gruenther who passed away last week following a training exercise in Italy. Board Chair Randy Hanvelt read aloud a poem in dedication to the Twain Harte native. District Five Supervisor Rodefer, a retired Air Force Lt. Col, led the pledge of allegiance.

The county will also need to find a new Treasurer-Tax Collector. Del Hodges announced to the Supervisors that he will retire in April after serving 18 years in the position. He has worked for the county a total of 25 years.

You can listen to the afternoon session of the Board of Supervisors in the multimedia section of myMotherLode.com.