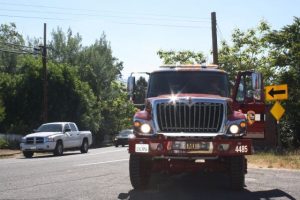 Columbia, CA — Columbia fire district captain and Volunteer Recruiter, Ryan Delgado, says the district is in the process of submitting an application to expand the district’s boundaries.

Columbia Fire District’s boundaries currently cover Columbia State Historic Park and one square mile near the park. Nearly half the area they are assigned is the non-taxable public land. Current and future funding for the District comes from property taxes on the homes within the District’s boundaries. Currently the County gets money from the area outside of the current one square mile that the Columbia Fire District covers. Delgado says “We are the closest resource to a lot of the homes in Columbia.” He added, “It puts a burden on us to supply manpower for medical and fire.”

Delgado notes there is documentation from the 1930’s when the district was turned down from expanding its boundaries. He says “That is just how it has been.” Delgado says that Local Agency Formation Commission (LAFCO) has helped define a boundary that matches the district’s current sphere of influence more closely.

The boundary would be from Upper Quail Mine down Covington, to the current boundary with the Community College property line, down the north side of Parrotts Ferry road to Springfield road and then to Gold Springs Road.

Delgado believes LAFCO’s involvement provides a sensible solution and will help the application be accepted. After the application is review and approval by LAFCO there will be two meetings for the public to comment on the proposal. The approval process is expected to take at least few months to finalize.

Columbia is one of several fire districts in Tuolumne County including Twain Harte, Tuolumne (City), and Strawberry. The County has two paid positions managed by Calfire and volunteers who manage several fire stations including Jamestown, Mono Village, Soulsbyville and Columbia college.