Will The Curtain Go Up Or Down? 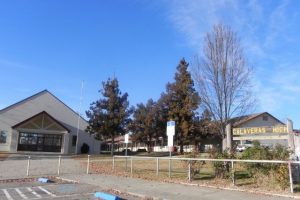 Calaveras County, CA – It’s the final curtain for the proposed Calaveras High School Art Center. The school will find out if it has the funding for the project Saturday at a Calaveras Unified School District Board of Trustees study meeting.


Last month, the Board gave Superintendent Mark Campbell until January 19th to see if a new funding plan was feasible for the $5.4 million, 500 seat performing arts center. That plan involves using some reserve money from the Jenny Lind Elementary school construction to help fund this project. Click here for an earlier article on the funding plan.

Campbell says, “It is a risk for the financing agency. That’s why it was on the table then off the table, now it’s back on the table as a possibility. Final word should be coming through shortly as to whether that will be a reality or not. If that is an option, then my recommendation will be for this plan. If it’s not an option then it changes my recommendation as to which direction we go.”

Campbell says all those directions will be discussed whether they get the money or not. Those include sticking with the current plan, starting from scratch on a new less expensive building or using the money for other projects.

Most of the money for the center is coming from a voter approved bond and the state kicking in more than a million dollars. However, that state money is contingent on the district sticking with the original building design.

Campbell says the board will make a final decision on the project at its January 22nd meeting.