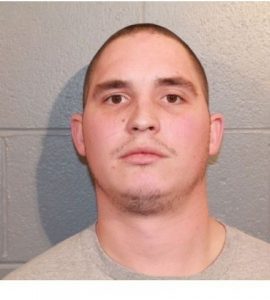 Angels Camp, CA — A minor fender bender on Highway 49 has landed an Angels Camp man behind bars. Angels Camp Police say 26 year old Joshua J. Fernandes rear-ended another vehicle at the intersection of Highway 49and 4 just after noon on Sunday. The Officer at the scene of the accident noticed Fernandes was acting strangely and showed symptoms of being under the influence of narcotics.


Chief Todd Fordahl says, “It was fairly obvious from the field sobriety tests that he should not be driving on the roadways. He showed a lack of coordination, total inability to follow simple directions, asking the same questions repetitively, really impaired motors skills and an inability to perform simple tests.”

While Fernandes was being arrested and handcuffed Police say he became hostile and combative and he turned toward the officer several times, intentionally stepping on the officer’s feet and spitting on him. They say Fernandes also intentionally slammed his head into the hood of the patrol car, denting it.

Fernandes is charged with DUI, Assault and Battery on a Peace Officer, Resisting Arrest, and Vandalism.