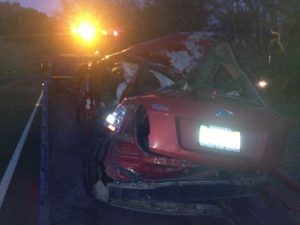 Columbia, CA — The CHP says speed and possibly alcohol may be to blame for an accident on Highway 49 Monday afternoon. 27 year old Mark Davidson of Columbia was taken by ambulance to Sonora Regional Medical Center suffering minor injuries. The crash happened around 4:30 p.m. on Highway 49 just north of Flume Road in Tuolumne County. The CHP reports Davidson lost control of his 2010 Kia on a curve, went off the shoulder and down an embankment smashing into some trees. They say speed was a factor in Davidson losing control of the car.


Officer Nick Norton says, “Davidson was not able to tell us how fast he was going, but we have determined he was going at an unsafe speed. He was a little confused at the scene of the accident and possibly several other factors were involved, like alcohol or other substances, that could have been in his system.”

Norton says Davidson had to be cut from his seatbelt. The crash is still under investigation.

A special thanks to Jesse Downes for the photo of the crash.